I love garlic… A lot. So, a few months ago, when I came across a recipe for fermenting garlic, I was all over it.

Following the recipe, I used a regular canning jar (metal lid). Except a few days after the garlic had been sitting on my counter for a few days, I did some extra research on fermenting vegetables. (cue dramatic music)

Using anything other than an air-locked lid can be dangerous as it allows the wrong types of bacteria to flourish. Good to know for next time, but not so great for the current batch. Now I’m paranoid of getting sick, but not enough to scrap a whole jar of garlic and start from scratch! I mean Learning and Yearning manged not to get botulism right?

So the garlic should be ready and fully fermented after about a month in fridge, but I figured I’d leave it until I had the time and energy to do something with it. Well that was in April, so yesterday I decided now was the time to open it up and give it a taste. 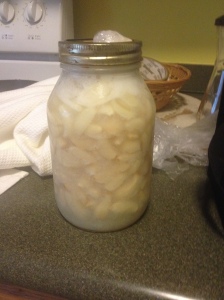 Easier said than done! Neither me nor Matt could do anything to get the lid off. I punctured a hole in the top, hoping to relieve the pressure. All the brine fizzed out, but the lid was still stuck in place! After about an hour of prying, I managed to get the rusted lid off, but was now more concerned than ever about the safety of eating this garlic.

I gave it some thought and figured I can honestly say I’ve eaten more suspicious stuff while backpacking, so I decided to dive right in! And It tasted really good! Like a garlicky pickle almost. And I can’t wait to throw them in my salad tonight.

Matt, being ever cautious, won’t even try one until after 24 hours to make sure I don’t get sick. Well it’s close to a full day and I’m feeling pretty normal so fingers crossed.

One thought on “Adventures in Fermentation”