We’ve only started keeping chickens in March, but Im already addicted! It seems like I’m adding to my flock every week and we’ve never had any problems. Whenever I buy new chickens, I keep them in a carrier and put them in front of the coop during the day, so the other chickens can get familiar with the new arrivals. That night, I stick them in the coop and usually try to watch over them the next morning just to make sure the transition went smoothly. Easy peasy!

However about two weeks ago, I bought three new chickens. They were young pullets only about 6-8 weeks old. I had a feeling that with their small size out wouldn’t be so easy. Things seemed alright that night in the coop, however the next morning, the smallest of the pullets had a bald spot that wasn’t there the day before. (Her feathers are already starting to grow back in)

Most of the research I’ve read suggests removing the chickens if the pecking leads to bleeding. Her injury wasn’t that bad, but I was worried, mostly because of the size of the patch and the small size of the pullet. So I immediately got some fencing, and set up a run for the little ones.

I also put up some wooden boards I had lying around, so that they had a shady place to hide. 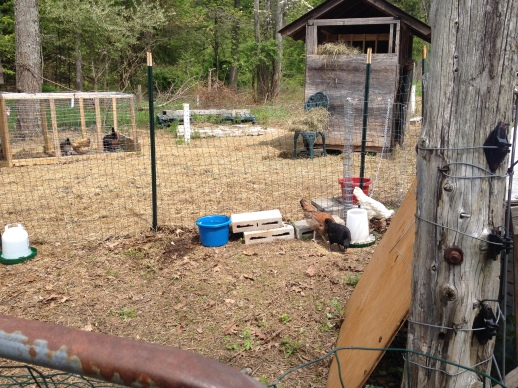 It’s been a little about two and a half weeks of them staying in the run during the days, and going into the coop with the rest of the flock at night and everyone has been getting along.

They seem ready to integrate with the rest of the flock (trying to run out in the morning instead of going into their designated area), but I think I’ll keep them separated for a few more weeks, at least until they’re closer in size to the older chickens.

3 thoughts on “Hen Pecked! Introducing New Pullets to the Flock”